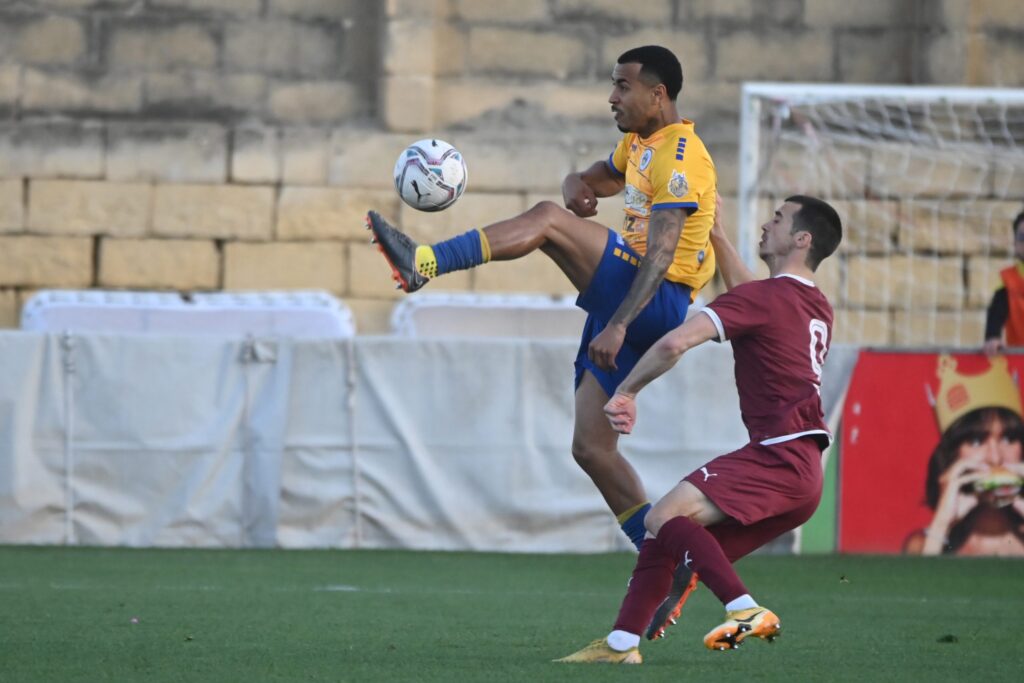 Lorenzo Soares Fonseca was the toast of Sta Lucia FC last night as the Brazilian defender headed home the winner that propelled the Saints into the semi-finals of the FA Trophy after a 1-0 win over Gżira United.

It was a historic result for Sta Lucia who will be playing in the semi-finals of the FA Trophy for the first time in the club’s history where they will take on Valletta next month.

All in all the Saints deserved their qualification as they produced the better play, particularly in the first half but were denied by an in-form Darijan Zarkov in the Gżira goal.

After the break, Gżira grew into the contest but in the end, it was Sta Lucia who struck the killer blow to the delight of their fans.

Gżira United thought they were off to a flying start when on five minutes Jefferson sped through the Sta Lucia defence and served the unmarked Yuri Messias who poked the ball home. But the ‘goal’ was annulled as Messias was in an offside position.

Sta Lucia responded on 13 minutes when Megan Valpoort intercepted a poor clearance by the Gżira defence but saw his shot pushed away by Darijan Zarkov.

The Maroons were forced to make an early change on 19 minutes when Nevin Portelli replaced the injured Antonio Pavic.

On 28 minutes, Sta Lucia missed a huge chance to take the lead when Valpoort failed to connect with Jurgen Pisani’s cross.

A minute later, Plut served the unmarked Jamie Zerafa who was denied by the onrushing Zarkov.

Four minutes later, Zarkov was at his best to deny Nicholas Pulis from long-range.

Just before the half-time whistle, Sta Lucia had another chance when Fonseca Soares played in Plut but the Slovenian was denied by Zarkov.

After the break, Gżira tried to regain control of the match and on 48 minutes Yuri Messia fired over from the edge of the area.

Just past the hour mark, Gżira almost caught Sta Lucia napping when in a quick break, Messias found Jefferson at the far post but the Brazilian headed into the side netting.

The match remained evenly poised with both sides continuing to push forward in search of a breakthrough but to no avail as the match went into extra time.

Five minutes from the start of extra time Jefferson went on another surging run inside the area and squared the ball towards Messias who was anticipated by Prates.

But it was Sta Lucia who scored on 103 minutes when from an Alan Da Silva free-kick, Lorenzo Soares Fonseca headed the ball past the dithering Zarkov.