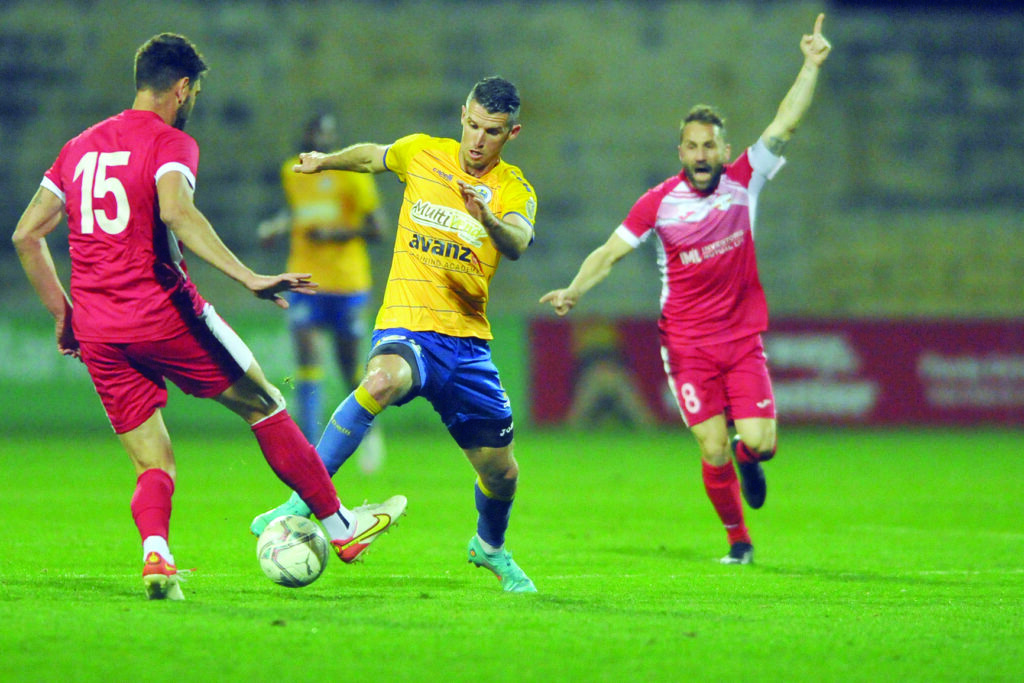 Giovanni Tedesco has heaped praise on his players’ character as Sta Lucia stepped up their bid to retain their top-flight status with an impressive 3-0 win over Balzan that enabled them to move out of the relegation zone for the first time this season.

Sta Lucia’s progress since the Italian coach took charge of the team last January has been anything less than remarkable as the southerners have managed to chalk up four wins from their last five league matches that lifted them to the 25-point mark, level with Mosta and three clear of second-from-bottom Balzan.

On Monday, the Saints were in control right from the outset as goals from Victor Prates, Gianmarco Conti and Vito Plut earned them a second successive success against Balzan.

“I’m really proud of my players,” Tedesco told the Times of Malta.

“To outplay a team like Balzan that boasts a squad of superior quality than us is surely a huge feat for us. All merit of our improvement should go to the players who since I took the job here have embraced my football philosophy and worked really hard.

“Right from the start, the players have given their 100 per cent. Results didn’t come our way straight away and here the players realised that they needed to give even more than 100 per cent.

“The team has started to improve slowly and have become similar to me in that they never stop fighting on the pitch throughout the 90 minutes and that has made a lot of difference.

“When I took over, the team looked destined for the drop but the players kept believing and we managed to recover ten points from Balzan and eight from Mosta to give ourselves an opportunity to avoid relegation.

“The win against Balzan was very important but it’s clear that we haven’t achieved anything yet.”

Next up for Sta Lucia is a match against Sirens on Saturday and the Italian coach said that it was time to put behind them their performance against Balzan and focus fully on their next match against the St Paul’s Bay outfit.

“Every match in the Play-Out round are going to be very important,” Tedesco said.

“We have to treat each of the remaining four matches as if they were a final for us. Sirens is going to be another difficult match and we need to carry all the positives from the match against Balzan and try and build on it.

“If you look at the teams in the Play-Out round there is a great equilibrium between the teams, apart from Valletta who I think have an edge in terms of quality from other teams.

“It’s important that all the players in the team put all their focus on our next match against Sirens and continue to work hard on the training pitch.

“Every match is going to be a real battle and if we don’t take the pitch with the right attitude we seriously risk throwing away all the good work that we attained so far.”